The D-101 Longbow-DMR (Designated Marksman Rifle) Sniper Rifle (also referred to simply as the Longbow or the DMR) is a Pilot anti-personnel semi-automatic sniper rifle manufactured by Lastimosa Armory that appears in Titanfall, Titanfall 2 and Apex Legends. The DMR is a variant of the R-201 Assault Rifle, modified into a marksman rifle role.[1]

The Longbow-DMR, boasting high damage per shot consistent to all ranges, is an ideal long range marksman rifle. Taking two shots to kill a Pilot, or one if it's a headshot (if the suppressor is used, it will take three body shots, and two headshots)

Being a marksman rifle/sniper with the default 6x zoom, this weapon is at home on large, open maps with high vantage points and long sight lines. Finding a good vantage point to take advantage of this weapons strengths is key to success. Staying in position however, is not recommended as enemy Pilots will often close the gap on your location, and will likely engage you in combat situations you are ill equipped to counter. As such, the Cloak ability is highly recommended, as when your location is eventually compromised, you can Cloak and retreat to a safer position to resume providing sniper fire. If you prefer to engage enemies on the ground or in mid range combat, using the alternative sights such as the AOG sight or the 4.5x zoom is recommended, turning this weapon in to a high powered battle rifle of sorts. It is ill advised to use the suppressor for this weapon, as its damage is decreased considerably, taking an extra bullet to kill an enemy Pilot. Though your gun shots won't show on the radar, the semi automatic nature of the weapon and its slow rate of fire (compared to the other pilot weapons) means that your time to kill will be extremely compromised.

After you get a few shots out, it is recommended to Cloak and relocate. If you don't have a silencer, they will likely come chasing you, so if you relocate and they look for you, you can get a free kill.

The Longbow, now simply the DMR, reappears in Titanfall 2 as a sniper-class weapon with a reduced magazine capacity of six. Presumably, this was to further separate its role from that of the G2A5 rifle, and prevent players from seeing it as a comparable battle rifle.

Reaching Generations 2.9, 3.9 and 4.9 with the DMR will unlock the regular, FIRE and GOLD variants of the Dead to Rights Banner. Reaching level 20 will unlock the The Megalodon Patch.

The Longbow DMR returns once more as a weapon in the Apex Games, remaining relevant even after the end of the Frontier War. The Longbow is a sniper rifle that once again boasts long-range accuracy and single-shot stopping power in exchange for a small magazine and limited close-range performance. It can be modified in the field with attachments for a sniper scope, a sniper extended magazine and a sniper stock for improved handling. It was one of the only weapons that could attach the Skullpiercer Rifling hop-up, which boosted the weapon's headshot damage (at launch, the only other weapon that could equip the Skullpiercer was the B3 Wingman). However, unlike the predecessors, the hitscan feature of this gun has been removed and targets require more tracking. 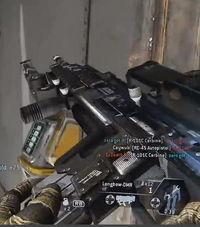 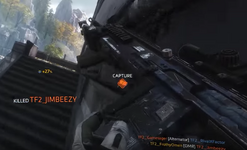 The Longbow in Titanfall 2 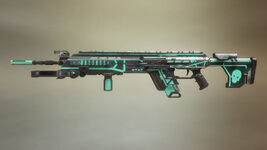