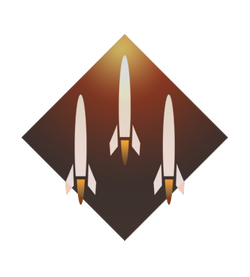 The Cluster Missile is a Titan Ordnance that appears in Titanfall and Titanfall 2. The Cluster Missile pod fires a missile which, on impact, deploys a shower of secondary explosive charges that continue to explode and saturate an area for a considerable time. It is unlocked at level 24.

The Cluster Missile is useful against enemies (such as Pilots) hiding in buildings or that are partaking in a rodeo attack. It is not very effective against Titans since they can easily move out of the area of effect if they notice quickly, especially on open maps. However, the Cluster Missile can be used against Titans (such as Ogre) that move slowly or that are within a confined area effectively. Firing at an enemy Particle Wall will cause the missile to explode on the surface of the shield, but the sub munitions will bypass it. If the enemy titan is close to the shield, they will have to move from behind it, back up away from it, or be severely damaged.

The Cluster Missile can also be used to deny certain territory from an enemy, or smoking an enemy out from cover, including Particle Wall; it is particularly useful against Grunts and Spectres, since they usually group together when they exit a Drop Pod or deploy from a Dropship. The cluster missile can be used to avert a rodeo attack, although this manuever is risky, since it can often cause self-inflicted splash damage. If the enemy pilot is at full health, you will lose full shield and at best 10-20% of armor. The cluster missile takes 15 seconds to recharge; this is shortened to 12 seconds with Fast Autoloader.

The Cluster Missile returns in Titanfall 2, though slightly changed. It now acts more like the Amped Cluster Missile, flying in a completely straight line rather than the circling, unpredictable path of the original. Aside from this, and the fact it can be only used on Northstar and Northstar Prime, it acts in basically the same way.

The Enhanced Payload kit will upgrade the misile to let its sub-explosions have a larger range, and last longer than the base variant.