Titanfall
Cheng "Bish" Lorck is a Combat Intelligence Specialist who operates for the Frontier Militia. He is a major supporting character for the Militia campaign in Titanfall.

Bish is an IMC-trained electrical engineer, born and raised on Earth. After getting screwed over by the IMC on a Frontier job placement that cost him all his savings just to move out there, he ended up in the right place at the right time - the notorious 'Bish bar brawl' - to take the Militia's timely offer of employment. Bish's current roles are to remotely hack into IMC systems during combat on behalf of ground forces, tracking mission progress, and giving tactical guidance to Pilots on the ground. He tends to work in tandem with fellow officer Sarah Briggs. 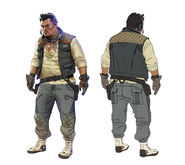