Frontier Militia
Backwater is a multiplayer map featured in Titanfall, available only in the third downloadable content, IMC Rising.

High in the mountains, ex-IMC pilot Barker and his fellow colonists have made a comfortable living by producing moonshine in this hidden bootlegging colony. This operation was attacked by the IMC after the Battle of Demeter, in an effort to crack down on IMC defectors. Signs on the map for Barker's Brewing Co. can be seen.

Several map-specific achievements can be unlocked on Backwater.

The piece of concept art that would eventually become Backwater. 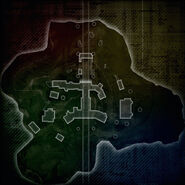 The logo for Bark's moonshine operation.