The B3 Wingman is a Pilot anti-personnel revolver handgun sidearm that appears in Titanfall, Titanfall 2 and Apex Legends. In all cases, the Wingman boasts immense high-caliber stopping power and notable accuracy to compensate for its small magazine and relatively slow fire rate.

In many ways, the B3 Wingman is the RE-45 Autopistol's polar opposite. It is very capable at long-range, but sacrifices short-range capabilities for that. It has high damage, and requires precision aiming as opposed to firing rapidly at short range.

It has a Burn Card called Amped Wingman that gives it a "match trigger" similar to the Hammond P2011, giving it a fast fire rate. 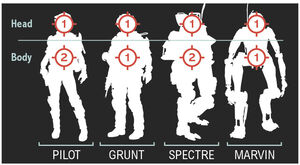 A player with the Wingman, standing by for Titanfall.

A picture of the Wingman from the PAX demo. 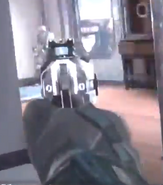 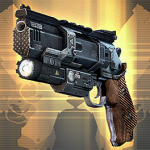 The Wingman, as viewed from the front on its Burn Card.

The B3 Wingman's in-game stats.

The B3 Wingman returns as a Pilot double-action revolver in Titanfall 2. It retains its stopping power, with increased ammunition capacity of 8 when extended mags are equipped.

The B3 Wingman Elite was added to the game in the Angel City's Most Wanted DLC. It is described as a high caliber revolver with a custom ergonomic grip to mitigate heavy recoil in heavy-G to low-G environments. It has been outfitted with a match trigger group bringing its pull weight down to 1.5 lbs. Other modifications are a black parkerized finish, forward rail plates, and a rear mounted Iron-Dot reflex sight.[1]

Levelling up the Wingman will unlock the Wingman Callsign. The Wingman XL banner can also be unlocked via Advocate Gift.

The "Wingman," wielded by a pilot slide-kicking into an enemy. 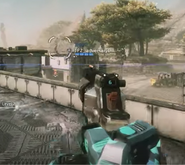 The Wingman, as viewed from first-person perspective. Overall, not much seems to have changed. 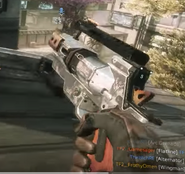 The Wingman's bizarre reload mechanism returns from the first game.

The Wingman in the weapon select screen.

The B3 Wingman appears again in the Apex Games, remaining relevant even after the end of the Frontier War. It's a heavy ammo pistol that once again boasts single-shot accuracy and stopping power in exchange for a small magazine and comparatively slow rate of fire. It can be modified in the field with attachments for a close-range scope and a heavy extended magazine. The Wingman also is the only pistol that has a headshot multiplier greater than 1.5x, and does not fall off in damage at range. Its hipfire is also accurate and the bullet will always go to the center of where the crosshairs intersect.

Concept art for the Wingman in Apex Legends.