The Atlas is the original Titan model produced by Hammond Robotics. It has a balance of mobility and armor, having more mobility than the Ogre, but more armor than the Stryder. This was the first Titan to be revealed.

The Atlas seems to be the second tallest Titan model, though exact measurements are unknown. Based on photos of the Atlas standing next to a pilot, it can be estimated to be between 20–25 feet tall. Its main entry point is in its chest, which opens up for the player. The Atlas also has a secondary entry point — a small hatch in the top. This is also the eject port for the Atlas.

The Atlas is the oldest Titan model on the Frontier and has instigated the development of both the Stryder and Ogre patterns. It was used through the Titan Wars, and onto the Frontier War where the Titanfall games take place.[1] The Atlas is equipped with a Damage Core, which, when ready, the pilot can activate on command to substantially increase damage dealt by the titan.

At the launch of Titanfall, the Atlas was the only model available at the the start of the game.[2] The default loadout given to new players is the Assault loadout. However, the Mortar Titan can also be encountered in Frontier Defense.

The stats for the Atlas Titan are below, they're best viewed on a relative scale to the other Titan Chassis. Each stat's ranking is displayed next to the stat unit. (Source)

The Atlas, with its perfect balance of power and mobility' is an excellent Titan for all engagements and situations. Considered a Jack-of-All-Trades among the three Titan classes, it has more mobility than the Ogre, while being able to withstand much more punishment compared to the Stryder. Any Titan weapon works well with the Atlas, though mid-long range weapons such as the XO-16 Chaingun are recommended. The Atlas's main benefit is that it can potentially deal out the most damage of the three Titans due to its Damage Core.

The Atlas is the frontline attacker of the three Titans and should be used as such. The Atlas works well in moving into an area and clearing out any resistance. While Stryders are the Titans that actually go to acquire an objective (such as a Flag) or claim a Hardpoint, the Atlas is the Titan that covers the nimble Stryders. Several Atlas's working together make an effective assault unit that is capable of laying waste to any target.

The Atlas's place as the middle Titan gives it no specific benefits, Damage Core aside, but also no specific disadvantages. Though the Atlas has enough firepower to take on a Stryder and enough maneuverability to take on an Ogre, it does not excel in any one role as the other two are aside from serving as the main attacker. Therefore, the Atlas is best played in Attrition.

The Atlas does not directly appear in Titanfall 2, though two Atlas derivatives are seen; Ion and Tone. Atlas Titans now have 10,000 health and one Dash by default (equivalent to a Titanfall Ogre). Sub-variants of these Titans include Tone Prime and Ion Prime. The Atlas is also seen on the map Boomtown, as multiple cardboard figures with red paint near the hatch.

The Atlas also makes an appearance in Titanfall Online, both in its basic form and with a Tier 2 variant. The Atlas Tier 2 has its own unique loadouts and skins, including the Atlas Gauntlet piloted by Jack. The basic Atlas has also recieved a slight redesign.

The Atlas appears as a unit can be fielded in Titanfall: Assault. The standard version is equipped with an Arc Cannon.

Strategically, the Atlas is the designated anti-heavy Titan. It takes a few seconds to fire its single-target shot, but its charged shots are beefy and deal signficant damage to anything it hits, be it a Titan, a turret, or even a wayward Pilot. It can also conveniently store a charged shot to immediately unleash upon the first enemy it sees. Because it must pick its shots judiciously, the Atlas can't afford to be distracted, so make sure the area is clear of any wayward targets so it can deal damage where it will count the most. An escort helps as well, as an Atlas unharrassed and free to do its damage is devastating.

A turnaround reference of the Atlas.

Concept art of the Atlas' cockpit. 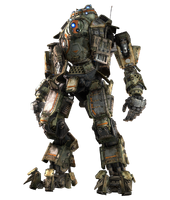 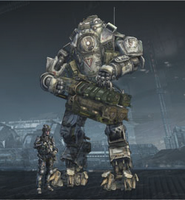 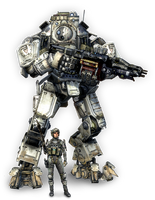 An Atlas next to a Pilot 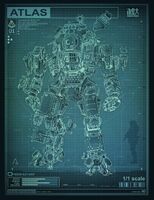 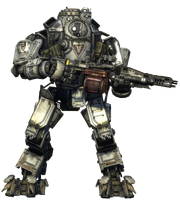 An Atlas placing Barker in the sewers under Angel City for escort to safety.

A Militia Pilot giving orders from within his Atlas

The Atlas, as seen in Titanfall Online