The Archer Heavy Rocket, also known simply as the Archer, is an anti-Titan lock-on rocket launcher manufactured by Brockhaurd Manufacturing that appears in Titanfall and Titanfall 2.

The Archer Heavy Rocket launcher is a multi-role rocket launcher employed by infantry on the Frontier. It has several main firing modes - the primary of which requiring the user to acquire a single lock-on, before firing a self-guided missile that will then seek the locked target automatically. However, the launcher also supports dumb-fire[1] (firing the missile without need for a lock) and mortar fire modes,[2] for increased versatility in the field.

Although labelled as an Anti-Titan weapon, the launcher is capable of locking on to other kinds of target such as Crow and Goblin dropships, Heavy Turrets and Reapers.

An Amped modification of the Archer, developed by Hammond Armament Division, allows the weapon to fire the more powerful Titanhammer Missile to serve in more direct Anti-Titan roles.

In Titanfall, the Archer's high power is compensated for by its lock-on time of 1.05 to 1.55 seconds, depending on your distance from the target. It has a maximum lock-on range of 123.825 meters.

To lock-on to a Titan with the Archer Heavy Rocket aim down the sight at a Titan until the red lock-on indicator is shown. At this point, firing the weapon will launch a rocket that will track the Titan. Note that when you begin to lock onto a Titan, the pilot in it receives warning and approximate direction from which he is targeted. Also, there is a sound indicator of missile approaching.

The Archer Heavy Rocket is completely useless while rodeo attacking, as you cannot zoom in to get the required lock on. Even if you do, it does not deal more damage and will kill you with the missile explosion. Also, it can't be used while hanging from walls.

Because of its 1.05 to 1.55 second lock on and 3.8 second reload time, this weapon is best used at extremely long ranges over clear sight lines, where the locked on rocket will not fly uselessly into obstructions. The Quick Reload Kit can improve reload times and, also, it's rate of fire.

Using this weapon in Angel City is not recommended, as the Sidewinder or other Anti-Titan weapon will provide more DPS given the short and/or straight paths throughout the map.

When used by Grunts, rockets will deal 68% less damage against titans than if a pilot were using it.

The Archer remains largely unchanged from the first game in Titanfall 2. Notably, it now has a much faster projectile speed, with the missile capable of making much tighter turns. As such, the Archer is one of the most powerful Anti-Titan weapons in the game.

Additionally, in singleplayer, the Archer can now be dumb-fired like a traditional rocket launcher, compensating for the fact that Jack Cooper almost never fights anything bigger than a Reaper without having BT available and thus allowing the weapon to be used on infantry. In multiplayer, the weapon still requires a lock-on.

The Homestead Security Banner, and its [FIRE] and [GOLD] variants, can be unlocked by levelling the Archer to generation 2.9, 3.9 and 4.9, respectively. The T-Minus Patch can be unlocked at Archer Level 20.

The Archer Heavy Rocket is a fairly powerful weapon. However, the lock on time and the fact that you need to expose yourself to achieve a lock makes it a hard weapon to use in prolonged attacks. It is advisable to use a hit and run strategy by locking on, pulling the trigger, then running away to attack the target some other time, using a "fire and forget" ideology. this strategy is able to significantly increase your survival time against enemy Titans, especially when they're distracted with fights against other Titans, as it gives you time to recuperate and let them forget about you before you attack again.

In Titanfall: Assault, the Archer is employed by the Pilot Boomer. 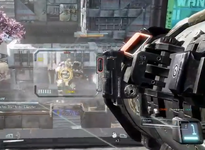 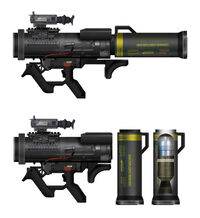 Concept art of the Archer

First person view of the Archer

Archer with the Phantom Elite Warpaint

The Archer in Mortar configuration, as used by Mortar Spectres 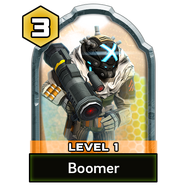