The Apex Predators are a mercenary unit of elite Pilots led by the mercenary commander Kuben Blisk. They fight for the highest bidder regardless of moral ethics, and will do whatever is required to earn their paycheck. Their Titan Insignia can be bought from the Black Market in Titanfall for 20,000 Credits.

The Apex Predators are a group of mercenaries contracted by the highest bidder, known to be active as far back as 2658 and involved in a theft of Branthium that resulted in Olympus' phase runner explosion. During the Frontier War, they were usually hired by the IMC. After the Battle of Demeter, they were then contracted by ARES Division to secure transportation of the Ark to the Fold Weapon and oversee security operations on Typhon. They are a motley group of bloodthirsty mercenaries with a history of aligning themselves to the highest bidder, which, more often than not, is the IMC.

By the events of Titanfall 2, the Predators were under contract with General Marder and his ARES Division. The six known members of the predators had been given command of IMC infantry units, with each being assigned a certain area to patrol. During the Militia assault on Typhon, the Apex Predators would see action fighting against Tai Lastimosa and BT-7274, with Ash eventually stabbing the Titan from behind.

Eventually, Kane would come into contact with Jack Cooper, but was quickly defeated by the Pilot. Jack would take Kane's radio, giving him access to the Predators' communications - and just in time to hear Blisk order Slone to execute Militia prisoners. From there, Jack and BT would stumble into the World Foundry run by Ash. Initially, Ash would attempt to kill Jack through the use of a simulation dome, but would soon be scolded by Blisk for unprofessionalism and ordered to scuttle the facility, before being killed by Jack. Richter would later encounter the duo and similarly fall after watching his forces fail to stop Jack from activating an Interstellar Beacon, as would Viper in an attempt to stop Jack and BT from reaching the IMS Draconis. Viper would, however, heavily damage BT, allowing Blisk to capture the Pilot and Titan.

Blisk and Slone would interrogate Jack, though he would break free and be forced to battle through hordes of IMC troops in an attempt to destroy the Fold Weapon. He would arrive at the control room just as Marder was relieving Blisk of his duty, before killing Slone.

Due to the Predators' contract being completed, Blisk would let Cooper live, giving him an invitation to join the Predators. He would then escape, claiming to "have other people with money to see". Blisk would go on to hire new Pilots for various jobs, and at some point was involved in the IMC operation to retake Colony G21.[1] Given the death of every member aside from Blisk, the group is now hiring new Pilots.

Ash would also be rebuilt by Vinson Dynamics, before contracting her own mercenary pilots to raid the Remnant Fleet, in an attempt to find out more about her past.

The Apex Predator insignia as seen in Titanfall 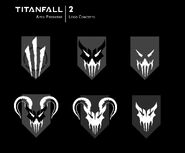 Concepts for the Apex Predators' logos in Titanfall 2
Community content is available under CC-BY-SA unless otherwise noted.
Advertisement