The Alternator (also referred to as the SP-14 Hatchet in concept art) is a Pilot anti-personnel twin-barrel submachine gun manufactured by Emslie Tactical. It makes its debut in Titanfall 2[1].

Unlike the other weapons in Titanfall 2 (excluding the Flatline), this submachine gun has side-to-side recoil instead of vertical recoil commonly seen with other weapons. The "Hatchet" earned its nickname from its shape, high rate of fire and brutally "chopping" up its targets in close quarters engagements with its 10mm round. Its firing range is effective at 200 metres with a muzzle velocity of 800 m/s and a muzzle energy of 510j in 9.78 m/s^2 standard gravity.

Tried and true, the recoil dampening system is ideal for firing while in movement, which is an ideal selection for Shinobi-Class Pilots. Its high speed, lightweight, compact design allows for Pilots to operate melee weapons while accurately delivering a hail of gunfire downrange. Skilled pilots are known to eliminate whole squads of Drop Pod infantry in seconds armed with an SP-14 Hatchet and a Machete.

The SP-14 features a collapsible stock, snub foregrip, and is compatible with Extended Magazines, a Holosight, Threat Scopes, Underbarrel Flashlights and HCOG Sights.

A useful tip from experienced players is to fire in short, controlled bursts called "tapfire". This can negate almost all of this weapon's recoil.

The Alternator returns in Apex Legends, as a heavier-hitting SMG that consumes light rounds. It bears many characteristics from its previous iteration, like being an SMG with more accurate hipfire, and being the hardest-hitting of the SMGs (which is further emphasized when targets have shields). It is a Care Package weapon along with the Spitfire LMG, Kraber-AP Sniper, and Scout. This means, like other weapons in CP, that the weapon and its special ammo type cannot be found on the ground, and once all 245 rounds are used up, the player must discard the weapon.

As of Emergence, the Alternator comes fully kitted and maxxed out with all of these attachments.

Concept art of the Alternator, then known as the Hatchet.

First-person view of the Alternator. 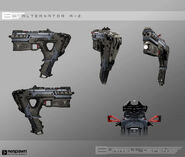 Concept art for the Alternator in Apex Legends.