Titanfall
Airbase is a multiplayer map featured in Titanfall and Titanfall Online. Airbase is set inside IMC Airbase Sierra on a distant moon of Demeter, and functions as a docking station for warships. It is equipped with three Repulsor Towers, sonic emitters which force the wildlife away from the base.

IMC Airbase Sierra is one of the largest installations ever built on the Frontier, situated on a planet where giant Leviathans roam the landscape. To protect its base from the super-sized local wildlife, the IMC has installed three huge Wildlife Repulsor Towers, also referred to as “dog whistle” towers by base personnel. Built to service the largest ships in the ﬂeet, the base structures are huge, creating large encapsulated regions of combat. Pilots often ﬁght ﬁercely over the turret at the edge of the Airbase, where the adjoining building can serve as a very defensible ﬁrebase with good sight lines.[1]

This map has many wall jumps and runs that you can really take advantage of, which will aid your team towards a victory. Study this map and the many jumps and you’re sure to pull off some incredible plays.

It features a large hill that grants tactical superiority, but also limits the mobility of Titans and Pilots on top. There is only one Heavy Turret on this map.

On Frontier Defense, this map has five waves. The Harvester on this map is located at the back of the map, next to the Heavy Turret. Enemies can approach from down the ramp to the right, through the hangar in front or from the airfield to the left. The presence of a Heavy Turret will greatly assist in defending the Harvester.

During the development of Titanfall, Airbase was originally designed for the game's single-player campaign as a mission called Worker Base. The mission would have had the player, playing as James MacAllan, infiltrating the facility and sneaking through the base undetected to rescue an ally who was being held captive. The mission was ultimately scrapped when the decision was made to turn Titanfall into a multiplayer-only game, and Worker Base was repurposed as what would become familar to players as Airbase.[2] 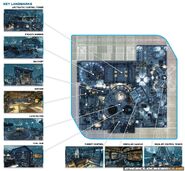 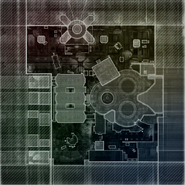 An IMC Bomber docked in the base

IMS Solaris docked in the base

Another view of the Solaris and accompanying Repulsor Tower, as seen in Titanfall Online.

The hangars underneath the base.