A-Wall is a Pilot tactical in Titanfall 2.

The A-Wall pilot will throw out a orange particle wall that rejects incoming shots from any weapon. It also amps outgoing shots to deal more damage. This effect doesn't stack with Amped Weapons or Hard Cover.

The barrier is completely invulnerable to any form of damage, so the only way to counter it is flanking or area of effect weaponry.

As it is impervious to all damage, some pilots deploy the A-wall in order to combat Titans face to face, the damage boost allowing them to substantially harm their opponent.

Many weapons work effectively with this, notably the Charge Rifle and X-55 Devotion. The Sidewinder and Thunderbolt are also extremely effective in an Anti-Titan role when used with A-Wall, especially in LTS.

Due to pilots' mobility, they can easily flank and kill the user, especially if the latter isn't paying attention to their surroundings. As such, in most pilot engagements, the A-wall is simply ignored, being too cumbersome and ineffective. If you do choose to employ it against pilots, choosing a space with a fair amount of cover and excellent visibility will serve you well; open spaces provide you excellent sight lines, but leave you vulnerable whereas heavily covered areas can create plenty of opportunities for ambushes. 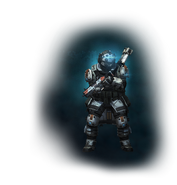