The 40mm Tracker Cannon[1] (Otherwise known as the 40mm Titan Heavy Rifle or "40 mil")is a Titan weapon in Titanfall 2. It is semi-automatic, firing explosive rounds that establish partial locks when used by a Tone Titan.

The 40mm Titan Heavy Rifle (Or "40 mil") is a multi-purpose/ anti-Titan automatic cannon designed by Brockhaurd Manufacturing. It is a popular and versatile Titan armament often fielded by Pilots operating in medium to long-distance engagements. The 40mm cartridge can be customized to damage enemy personnel or material with a standard Depleted Uranium (DU) shell or the highly effective Armour Piercing, Depleted Tungsten (APDT) M20 explosive shell. When accurate heavy firepower is required, the selection of choice is the 40mm Cannon. It has also been upgraded with improved armour.[2]

When fired at Titans, Dropships, and Reapers, the cannon will establish a lock, signified by a white pip on the HUD. When three locks are established by three direct or near-hits, the pips will turn red and the option to fire a Rocket Salvo will appear. The weapon is semi-automatic by default, but a modification added in Angel City's Most Wanted added the ability to burst-fire the weapon by charging up to three rounds. 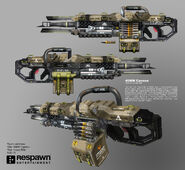 The 40mm Cannon, as depicted in Titanfall: Assault

Another view of the 40mm in Titanfall: Assault