The 40mm Cannon, also simply known as the 40mm, is a Titan 40mm cannon manufactured by Brockhaurd Manufacturing that appears in Titanfall. It has since been surpassed by the 40mm Tracker Cannon, used on the Tone chassis.

The factory issue 40mm Cannon is a semi-automatic weapon that fires a high-explosive round with good accuracy. During the Titan Wars, a resourceful Pilot and his support unit tore a 40mm cannon from a stranded mobile infantry carrier, and attached it to his Atlas, replacing his defunct primary weapon. The opposing force, expecting an unarmed Titan to surrender the next day, was wiped out in a battle that barely lasted two minutes, and thus a new Titan weapon was born.[1] Following the 40mm Cannon's employment, the IMC initiated the 40mm Autofire Project to investigate the feasibility of a fully-automatic 40mm weapon system, though the project was deemed economically unfeasible for mass-deployment.[2]

By the time of the Battle of Typhon, the 40mm had been upgraded or replaced with the 40mm Tracker Cannon, employed by the Tone loadout. 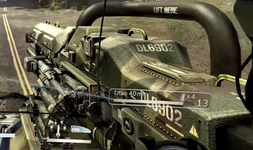